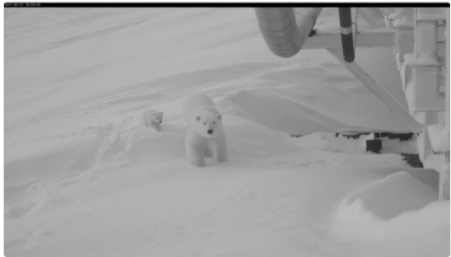 Mother’s Day came early for a mother polar bear in Northern Alaska, thanks to Hilcorp Energy Company, which partnered with the U.S. Fish and Wildlife Service to give the bear and her cub a safe place to den for the harsh winter months near an active Hilcorp oil production facility in Prudhoe Bay, Alaska.

In December, Hilcorp employees noticed what appeared to be a new den entrance under a bridge along the industrial roadway to the Endicott Island oil production facility. Using thermal cameras, Hilcorp employees identified a female polar bear living in the den.

Aware of the importance of the initial period of a newly-formed polar bear den, Hilcorp employees took extra precautions not to disturb the den. Working with the U.S. Fish and Wildlife Service, they closed the roadway running over the den. If disturbed, there was a possibility that the mother polar bear could abandon the den or even abandon the cub before he or she was prepared to survive on its own.

In March, after months of quiet from the den, the mother and a baby cub emerged and spent two weeks around the den site before heading out for spring seal hunting season. Hilcorp was prepared for the reemergence of the mother polar bear, and took precautions to not disturb the polar bear family’s environment.

Hilcorp worked closely with the U.S. Fish and Wildlife Service, and enlisted the help of Polar Bears International and Bringham Young University for additional assistance, while also giving them an opportunity to study the den site of a polar bear family.

The U.S. Fish and Wildlife Service gave the Hilcorp the go-ahead to resume full production once the family departed.

All organizations involved celebrated this collaborative effort as a happy mama bear and her new polar bear cub departed undisturbed and will be celebrating Mother’s Day in peace this weekend.

U.S. Fish and Wildlife Service story, “Mama Polar Bear And Cub Make It Through Denning Season Thanks To Collaborative Work”